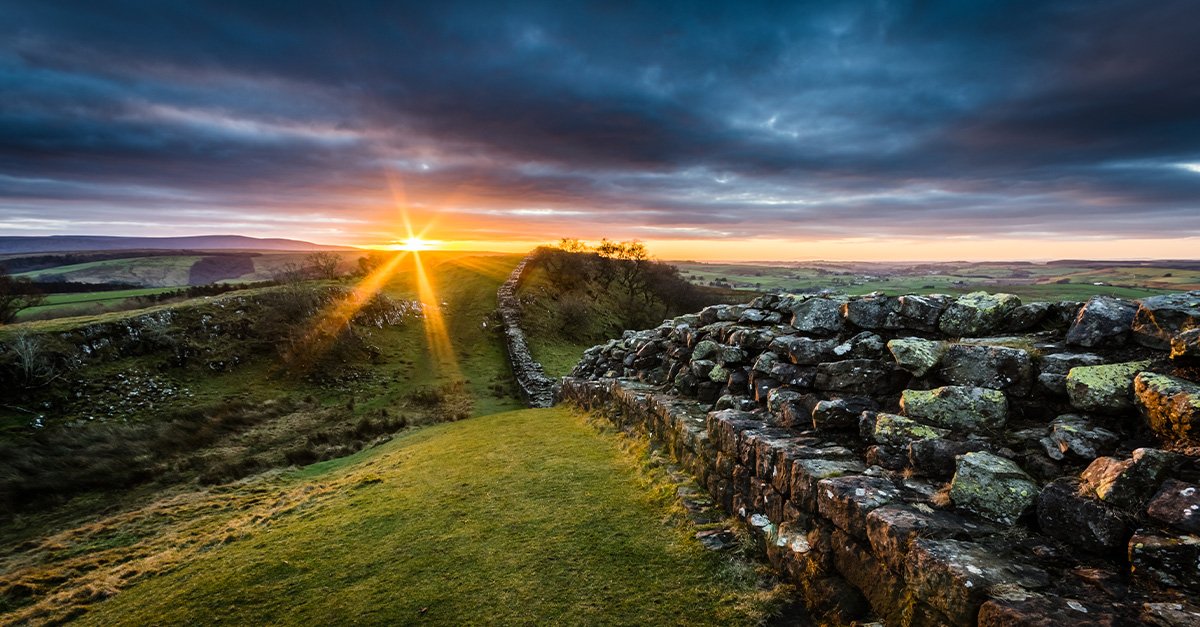 With a year-long programme of events to celebrate, Cathy Toogood takes her children on an awe-inspiring Roman-inspired adventure

The only threat we can currently see from the watchtower at Housesteads Roman Fort in Northumberland is the odd sheep, accompanied by an energetic lamb. Nonetheless, my eight-year-old daughter, May, and five-year-old son, Zac, are keeping a keen lookout down the hillside.

This slope next to the fort’s south gate was once the site of a vicus (civilian settlement). Now, remains of its buildings can be seen before an expanse of undulating emerald fields, punctuated by patches of fir trees, and with views of the Northumberland countryside for miles around.

While exploring the well-preserved Roman ruins at Housesteads, we see remains of barracks, a hospital, gates and even Roman toilets (clearly the best bit, from the kids’ perspective).

The site prompts my children’s minds to run wild with visions of the 800 soldiers who once lived here, putting them in full Roman character, imagining life at the northernmost point of the Roman province of Britannia.

We march out of the northwest side of Housesteads down a section of Hadrian’s Wall to begin a two-mile walk towards Sycamore Gap. This spot, where a tree sits perfectly framed in a dip, was made famous by its appearance in the film Robin Hood: Prince of Thieves.

It’s now one of the most photographed trees in England. I wonder what Emperor Hadrian would have thought of all the Instagram posts featuring this spot next to his wall.

It’s now one of the most photographed trees in England

The construction of this Unesco World Heritage Site started on Hadrian’s orders 1,900 years ago and to celebrate the anniversary in 2022, there’s a programme of events and activities in Northumberland, making this year a fantastic time for clients to visit.

Family events being held include a Roman-themed summer explorers’ quest, outdoor theatre and even a Roman army school as part of a Big Birthday Bash at Vindolanda.

Despite this anniversary and the fascinating historic attractions, nowhere on our family trip to Northumberland is busy. And that’s one of the joys of visiting England’s quietest county with children.

We relish having Vindolanda, one of Europe’s most important Roman archaeological sites, practically to ourselves. May marvels at the sheer size of it saying, “We’ll never get around this, mummy, it’s huge.” But soon enough, she’s darting around every corner, peeking into the spot where archaeologists and volunteers are hard at work (excavation work is taking place here on weekdays until September 23).

The Vindolanda writing tablets are a standout discovery: the thin pieces of wood are some of the oldest surviving handwritten documents in Britain.

As dusk sets in and we arrive at our accommodation in nearby Kielder Forest, we really begin to appreciate the natural setting, with its wide-open, wildlife-filled spaces. Rabbits scamper on the banks and owls hoot above us in the tall, spindly trees as we drift off to sleep.

“I’ve spotted 33 rabbits so far,” Zac boasts on his way to bed. And sightings continue the following morning as we stroll along Kielder Water’s Lakeside Way.

Bird-obsessed May is impressed with how close pink-breasted chaffinches and sunshine yellow siskins dare to perch. “Wait until I tell granny,” she says gleefully.

Rabbits scamper on the banks and owls hoot above us in the tall, spindly trees

Here we walk to Freya’s Cabin, one of several art and architecture installations dotted around the man-made lake. A fantastic spot to visit with children, the golden hut has been constructed like a flower press and looks across he water to a wooden hut on the other side.

According to a story written inside it, Freya lived on this side and a man called Robin on the other. Smaller members of the family will love reading the tale and looking out of the hut’s glass-fronted viewing platform, trying to spot the pair sailing on the lake.

Another spot that will excite children is Kielder Observatory in the Northumberland International Dark Sky Park. Up a two-mile access track through a forest, its angular building is designed to look like a ship sailing above the landscape, and it offers knockout views of Kielder Forest and Water.

We arrive for a Young Explorers event and, after an entertaining talk on stars and all things space, we’re guided around the observatory. Despite it still being light at 5.30pm, we look for Mercury through a telescope – the kids have more luck than the adults – and then all manage to spot the bright star Capella.

Next we see what our guide describes as a “beautifully spotty sun”, caused by disturbances in the sun’s magnetic field, before the kids are allowed to be hands on, standing on Mars rock, picking up real meteorites and touching a piece of the moon.

The Lyrid meteor shower is expected the night we visit, so the children go to sleep with their heads full of meteor facts and history. “Mummy, can I have a Roman shield?” Zac asks as I tuck him in. “I think I’ll need one to protect me.”

Suggest clients with kids take a boat trip to the nearby Farne Islands, home to puffins, seals and Arctic terns.

Children will love the excitement of staying in a woodland lodge at Landal Kielder Waterside.

Facilities include lodge hot-tubs, a pub and restaurant, indoor swimming pool, playground, bird of prey centre and activities such as archery. Three-night breaks for four people cost from £335.
landal.co.uk

There’s an on-site dark sky observatory and a restaurant. Family rooms are priced from £195 per night for four people.
battlesteads.com

❂ Militaria Exhibition
Until October 31, Roman Army Museum
Marvel at this range of well-preserved Roman military equipment never seen in public before, including decorative brooches that belonged to soldiers and a complete legionary helmet.

❂ Roman Falconry
July 26-27 Chesters Roman Fort
This one is for animal lovers – a chance to witness majestic falconry displays while learning just why birds were so important to the Romans.

❂ Roman’s Return: Big Birthday Bash
August 27-28 Roman Vindolanda, Hexham
Vindolanda Trust’s 50th anniversary celebration has something for everybody. From dressing as a Roman soldier to witnessing military displays, families can step back in time to the second century AD to experience Roman life in Britain.

McKinlay Kidd offers a six-night Northumberland Dark Skies & Nature holiday for £795 per adult from May to September, with child prices on request.

This includes B&B accommodation, dark skies observatory experience, a day’s guided walking tour of Hadrian’s Wall and a boat trip to the Farne Islands. Itineraries can be personalised.
mckinlaykidd.com