Tenerife Carnival is back: here’s how to celebrate 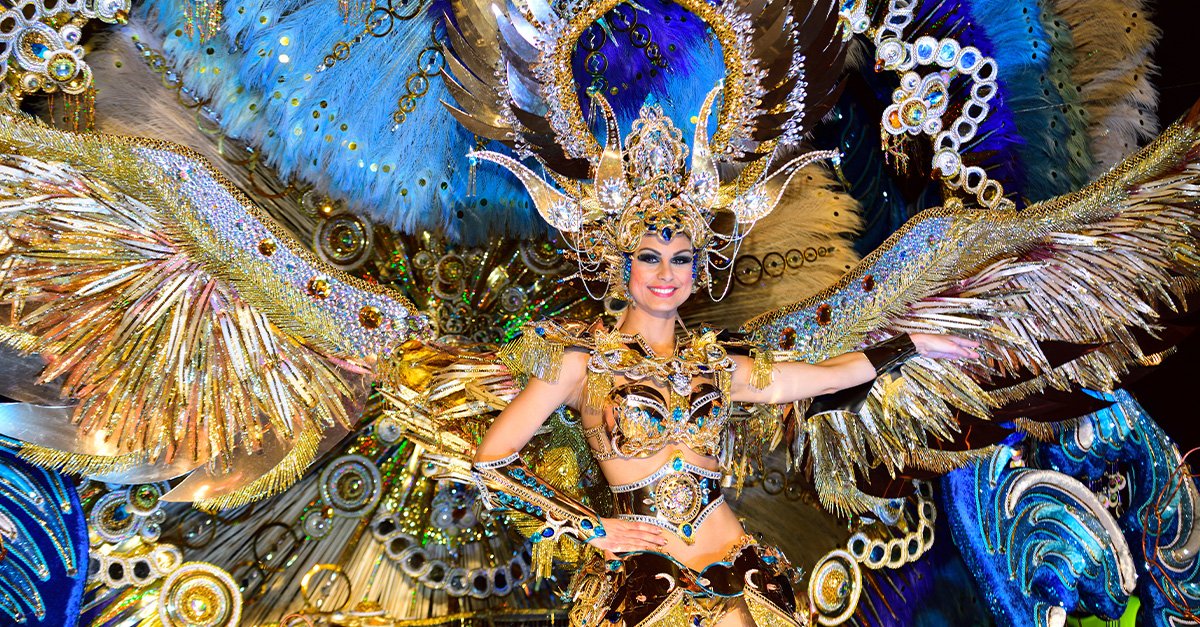 As the Carnaval de Santa Cruz returns to Tenerife this June, Rhonda Carrier offers a look at what revellers can expect

Looking back at the Tenerife Carnival from the other side of a pandemic, it’s hard to compute that in February 2020, I spent five nights straight partying in the thronged streets and squares of the island’s capital Santa Cruz, drinking and dancing with friends and strangers.

During the travel bans, I often scrolled through photographs of this and felt pangs of nostalgia for the unfettered hedonism. Now, at long last, the Carnaval de Santa Cruz de Tenerife is back, albeit shunted from its traditional February date to late June (but back to normal for 2023).

Considered the most Brazilian of all Spanish carnivals, Santa Cruz’s version is a great way to get under the skin of this island, which is usually most associated with resort-based fly-and-flop holidays.

“Tenerife Carnival is Spain’s biggest carnival and the second-most popular in the world after the one in Rio de Janeiro – you have to see it to believe it,” says David Pérez, chief executive of the Tenerife Tourism Corporation.

“We strongly recommend visitors swap beaches for some fancy dresses this June as this year’s carnival is coming back stronger than ever.

To fully enter into the spirit of carnival, it’s essential to pack a few costumes, or you’ll feel out of place among the locals, who truly go to town with dressing up. Whatever the theme in any given year (for 2022 it’s science fiction), expect it to be interpreted loosely.

Over the course of my five nights, though the theme was the 1940s and 1950s, I danced with revellers dressed as Batman, Freddie Mercury and Ronald Reagan, and chatted with everyone from drag queens to fake priests, pirates to gangsters, and Alice in Wonderland characters to Martians.

Anything really did go. Although technically carnival is spread over a month, the main public events are condensed into a few dates of mayhem and magic, this year starting on June 23.

From drag queens to fake priests, pirates to gangsters

Parades and parties take place in the daytime and the evening – and indeed all through the night in the case of the final go-for-broke jamboree on June 26, the Rhythm & Harmony Party.

There’s also a slightly paganistic and even sombre finale to it all, with a papier-mâché sardine carried to the sea in a mock funeral procession and set alight.

Flaming sardines aside, the parades are particularly great to watch with kids, with spectacular floats, troupes of dancers in glittering costumes and gloriously enthusiastic marching bands.

My friends and I drifted blissfully from one music stage or sound system to the next, dancing to salsa, bachata, techno and all sorts of musical styles. As we went, we refuelled on spicy potatoes, fried eggs, grilled sausages and peppers from street stalls, and stopped for tapas at streetside restaurants.

There were also plenty of stalls selling beer at what seemed ridiculously cheap prices for revellers carrying their own reusable cups. Tenerife Carnival has a long history going back as far as 1925, and one of the island’s perhaps lesser-known but nonetheless very interesting sights is Santa Cruz’s Casa del Carnaval museum, which traces this history through posters, costumes and floats.

It’s interactive too, with the chance to try on lots of carnival outfits – perhaps giving you inspiration for next time’s visit. Because once is never enough: Tenerife Carnival is addictive.

When we weren’t partying, we got to discover Tenerife’s highlights.

These include Teide National Park, with its walking trails around the eponymous volcano (Spain’s highest summit), its cable car to the top and its stargazing observatory, plus the Unesco World Heritage Site of La Laguna, an old city with beautifully preserved buildings and artisanal shops.

Another highlight was little-known Garachico and its natural swimming pools – formed during a volcanic eruption that destroyed much of this small harbour town in the 18th century – and Icod de los Vinos, site of the island’s oldest indigenous drago tree.

When we weren’t partying, we got to discover Tenerife’s highlights

Visitors who venture away from their resorts or hotels to seek out local venues serving traditional Canarian food will be richly rewarded. We were wowed by Restaurante Sabor Canario in one of the oldest colonial buildings in the historical district of La Orotava, on the north coast.

Set in a courtyard oozing character, this rustic eatery serves dishes such as goat’s cheese pâte, salt cod and rabbit. After a hearty meal accompanied by wines from the Orotava Valley, I couldn’t help thinking that, while there’s certainly a time and a place to fly and flop, there is much to be explored in Tenerife beyond the beaches and all-inclusive resorts.

After two long years, it’s time to get out there and join the party.

Aside from the carnival, the other highlight of our stay was a boat trip from Puerto Colón on the south coast: we spotted a sea turtle and a pod of pilot whales, while dolphins played joyfully alongside our boat.

Dolphin and pilot whale sightings are practically guaranteed year-round off Tenerife – there are about 400 pilot whales living in a seawater canyon. If clients want to spot migratory whales (humpbacks and finbacks), the best months to book a trip are November to February.

EasyJet holidays offers four nights at the five-star Iberostar Heritage Grand Mencey on a B&B basis from £644, including flights from Gatwick, departing on June 23.
easyjet.com/en/holidays

How Tenerife became the hottest short-hop winter sunspot
Sailing the Canary Islands with Azamara
The best theme parks in Europe for families with young kids, tweens and teens