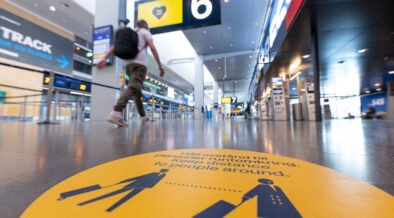 The recovery in air travel across Sweden accelerated in April, with more than 2.2 million passengers passing through the country’s airports – the highest monthly total since February 2020.

According to airport operator, Swedavia, strong demand, the launch of new operations by airlines and investments in new routes in time for summer are driving the recovery, which is says is “now proceeding at a rapid pace”.

It adds that it continues to adjust the scale of its airport operations to meet the rapid rise in air travel and together with its business partners is carrying out major recruitment efforts.

Swedavia’s ten airports had a total of more than 2.2 million passengers in April, which is an increase of a full 509% on an annualised basis.

Compared to 2019 and before the pandemic, nearly 70% of travel has returned. Stockholm Arlanda Airport had some of its most travel-intense days so far since the start of the pandemic, and travel at many of Swedavia’s regional airports approached 2019 levels.

“The rapid recovery is due to a number of factors, such as pent-up demand, a greatly improved range of travel options available in conjunction with airlines’ expanded summer traffic programme and new investments by airlines,” said Swedavia’s president and CEO, Jonas Abrahamsson.

“We also have a continued positive outlook for the summer, which is the year’s most intense travel season.

“Naturally, the fact that more people are now choosing to meet others despite great distances with the help of aviation is positive for an industry that has been hit really hard by two years of pandemic.

“Meanwhile, the rapid rise also entails great challenges as airport operations are now being scaled up. Not least, it is difficult for operators in the industry to manage to recruit staff in a tough labour market at the rate that is now needed, which moreover is a challenge we share with many industries and airports around the world.

“At Stockholm Arlanda, a brand-new security checkpoint is also being built, which will be placed in service in one year, but this will entail logistical challenges during construction.

“We are working hard in order to manage the situation as well as possible, but unfortunately due to the situation there is also a risk of longer waiting times than usual, including at the security checkpoint, at times going forward.”

Despite the good news, it should be noted that air travel at Swedavia’s ten airports has decreased by a total of more than 64 million passengers since the start of the pandemic 26 months ago.