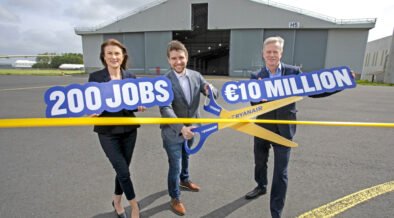 Ryanair today opened its first aircraft heavy maintenance facility in Ireland at Shannon Airport, delivering an investment of €10 million and creating 200 high-skill jobs in the locality, including licensed engineers, mechanics, and support staff.

The airline will invest €10 million in this state-of-the-art 5,200sqm facility, leased from Shannon Group, which will support the maintenance of Ryanair’s fleet as it grows to 600 aircraft by 2026.

The low-cost giant believes that the investment “resounds Ryanair’s commitment to the mid-west region and Ireland as a whole as it further drives post-pandemic recovery through connectivity, inbound tourism and employment”.

Ryanair has operated from Shannon Airport since 1986, opening its base at the south-western airport in 2005 and carrying over 17 million customers to/from the airport to date.

Shannon Group CEO, Mary Considine, said: “Ryanair’s investment at Shannon is a vote of confidence by them in the future of the airport. Having Ryanair at Hangar 5, one of ten fully occupied hangars on our Shannon Campus, is another significant boost for the region, creating high quality jobs for local aviation specialists.

“The resulting jobs and investment are also consistent with our strategic plan to increase economic growth and retain skills and talent in the region.

“We have a close relationship with Ryanair, with Shannon Airport now having more destinations served by Ryanair than in 2019.”

• All pictures courtesy of Arthur Ellis.