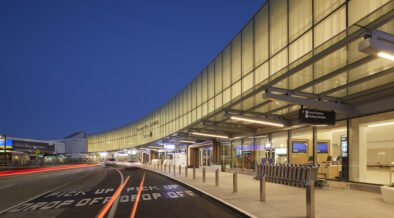 “This facility embodies the very best values of our region and celebrates the legacy of pioneering civil rights leader Harvey Milk.

“We are truly honoured to receive the People’s Choice Award from the American Institute of Architects, San Francisco. My thanks go out to the entire project team for this achievement.”

The $2.4 billion Harvey Milk Terminal 1 project is comprised of four phases. The first phase opened in July 2019 with the nine departure gates, followed in April 2020 by nine additional gates, an exterior façade with Harvey Milk signage and a new ticket counter area.

The third phase opened in May 2021 with the final seven departure gates, a new post-security connector to the International Terminal, a new museum gallery and a new display of exhibit content honouring the life and legacy of Harvey Milk.

The fourth and final phase of Harvey Milk Terminal 1, which will create a new North check-in lobby, was postponed by the COVID-19 pandemic, but has now resumed.

Originally scheduled for completion in spring 2023, this final phase is now expected to be completed in spring 2024.

In February 2022, Harvey Milk Terminal 1 has become the first airport terminal in the world to earn ‘Platinum’ certification using the latest standards from the Leadership in Energy and Environmental Design (LEED) programme developed by the US Green Building Council.

This latest version, known as LEED v4, raises the bar for the design, construction, and operation of high-performance structures.

In March 2021, Harvey Milk Terminal 1 became the first terminal in the world to achieve certification from Fitwel, a building rating system that provides guidelines on how to design and operate healthier buildings.

The construction of Harvey Milk Terminal 1 is divided into two projects: Boarding Area B (BAB) and Terminal 1 Center (T1C).

Companies involved in the design-build, construction and project management of the terminal include the Austin Commercial, Woods Bagot, Hensel Phelps, Gensler and AECOM.