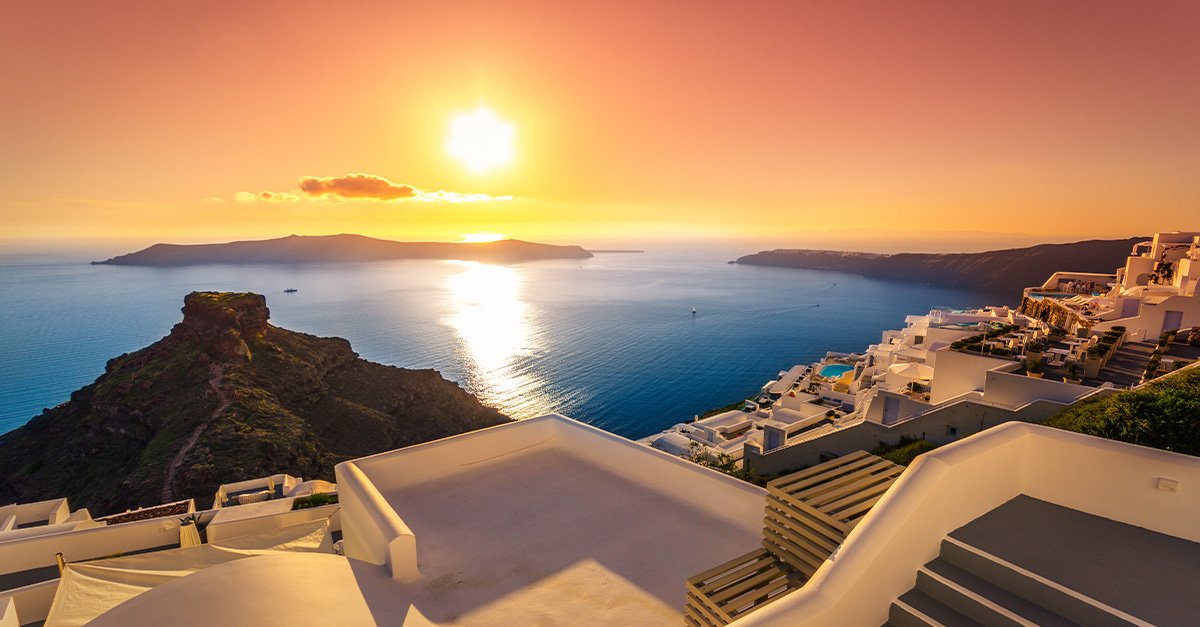 As BA restarts its flights from Gatwick to Santorini this week, Natalie Marsh finds the perfect spot to watch the sky change

Santorini is known for its sunsets: a quick scroll through Instagram during the summer months will confirm this is no secret. Every night, the cobbled streets and white-walled buildings that cling to the cliffside turn into a theatre where visitors can watch the display.

Oia, at the top of this crescent-shaped island, is one of the most popular spots for sunset-seekers. Holidaymakers flock to the town in the late afternoon to capture a perfect shot of the magical moment the sun starts to disappear over the Aegean Sea, shooting red and orange hues across the sky. But I don’t need to share my viewing spot with anyone else.

I’m staying at Omma, a boutique luxury hotel along the coast from Oia and just outside the town of Imerovigli. It will be reopening this spring as the first Nobu property in Greece. I take my place on a sunbed next to the infinity pool and soak it all in.

After Greece scrapped its passenger locator form last month and with BA restarting its flights to Santorini from Gatwick on April 15, the Aegean island is expected to regain its status as one of the country’s most-visited destinations.

It took courage, but I finally jumped into the sea – not from a high cliff edge, but from the back of the catamaran on which we spent half a day. My entry into the water was a little easier thanks to the warmish temperatures generated by seismic activity under the surface.

Here, on the sea bed, is a caldera, or hollow, formed during an eruption. There was something special about swimming here and getting close to the rocky islands, formed over millennia by volcanic activity.

Caldera Yachting offers private and semi-private cruises in the day or at sunset, and passengers get the chance to take a dip in the thermal waters, before climbing back on board to enjoy a delicious seafood and salad lunch.

Unlike many of its Greek island counterparts, Santorini isn’t well known for its beaches. Standing on top of the catamaran, the captain pointed out the red beach and black beach, named after the colours of their volcanic sand, but there are relatively few scattered in between the island’s long stretches of rugged cliffs.

These cliffs really stole the show: bumpy brown outcrops, beigey-white jagged rock faces and reddish slopes sat side by side, and no two parts of the coastline looked the same.

Stepping back in time

It’s not often that a historical or archaeological site truly takes my breath away, but nothing had prepared me for what I was about to see when I stepped into the building that houses remains of ancient Akrotiri. The excavated city, much of which is around 4,000 years old, was laid out in front of me.

Lost when buried in ash by a volcanic eruption in the late Bronze Age, it remained unearthed until 1967. We followed in the footsteps of its residents from the past, walking through what would have been the town’s main streets and peering into what’s left of the windows and doors of their houses.

It all felt bizarrely familiar. Everything that has been excavated bore resemblance to how we live our lives today: the vases and pots (some remarkably intact, with carvings and patterns undamaged), baths and, incredibly, a bed frame, didn’t look much different to ours some 40 centuries later.

I left feeling a sense of connection with those who’d resided here. Back at the hotel, as we gathered on the sunbeds for one final sunset, my thoughts drifted back to Akrotiri. We sat in silence as the sun disappeared over the horizon and the clouds drifted in and I couldn’t help but wonder if those in Akrotiri thousands of years ago enjoyed this same sense of serenity from a Santorini sunset.

Nobu’s first property in Greece, Nobu Hotel Santorini, and its signature restaurant, will open in May.

This was once a huge, fortified castle, but now only a small part remains. It’s thought a combination of volcanic eruptions and earthquakes caused its collapse. The ruins can be accessed on foot from Imerovigli by climbing down hundreds of steps – but it’s worth it for the stunning views of the caldera and of the town, which looks as if it’s hanging off the cliff.

This modern and interactive museum is the first of its kind dedicated to Plato’s fictional lost city of Atlantis, which is thought to have been Santorini. The myth of this ancient civilisation, based on a story by the philosopher, is explored through holograms, a cinematic experience and dioramas.

Displaying artefacts found across Santorini from thousands of years ago, this museum, in Santorini’s capital Fira, has everything from pottery and figurines to tools and weaponry. Several of the showpieces are from the ancient city of Akrotiri, as well as from other sites across the island.

Olympic Holidays offers seven nights at On The Rocks Hotel in Imerovigli from £738, including flights from Luton on October 16.
olympicholidays.com
PICTURES: Shutterstock/Marina Datsenko/MarinadeArt; Natalie Marsh