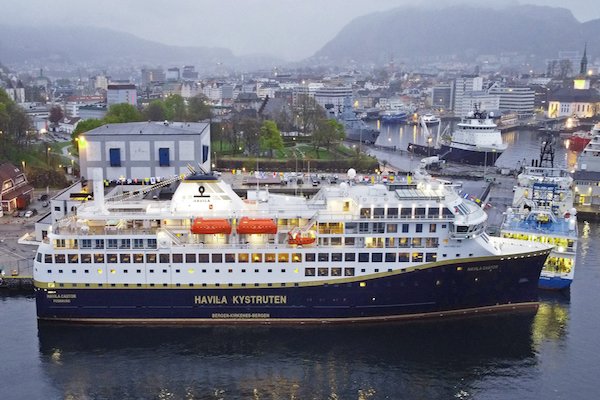 The second electric hybrid ship for Norwegian firm Havila Voyages is being prepared to enter service next week.

Havila Castor docked in Bergen early today (Thursday) after being delivered from its shipyard in Turkey and is due to start sailing on the coastal route to Kirkenes on May 10.

The itinerary includes calls into 34 ports along the Norwegian coast in 11 days.

The company claims the vessel has the world’s largest battery pack on a passenger ship with 6.1 megawatt hours (MWh), enabling it to sail emission-free for up to four hours.

The ship’s propulsion is a combination of natural gas (LNG) and the battery pack, which means that it already reduces CO2 emissions by up to 30%.

The new cruise operator is trying to cut ties with Russian firm GTLK, which was financing its vessels but has been sanctioned during the invasion of Ukraine.

Havila chief executive Bent Martini confirmed last month that the 640-passenger Havila Castor was now financed with equity and a €46 million loan from Tersan shipyard in Turkey, where the vessel was built, and the shipyard’s bank.

Havila Castor is also built for climate-neutral fuel alternatives such as hydrogen and ammonia. With current technology, gradual blending of biogas will further reduce CO2 emissions.

Martini said: “We can sail climate-neutral already today, by using biogas as fuel. In the short term, it is about access and price, and we work closely with our supplier to find a solution.

“We have been waiting for the delivery of Havila Castor to deliver on our mission and agreement with the Norwegian authorities.

“At the same time, we have a state-of-the-art ship with large cabins and a stylish Nordic design that our passengers will be able to enjoy to the fullest.

“Our investment in climate, environment and sustainability is more than just words. We will deliver, and we deliver from day one on the requirements that were set in the contract with the ministry of transport.”

The menu on board changes during the sailing and will reflect the areas in which Havila Castor sails.

Martini added: “Our goal is to cut food waste on board, and we have a completely unique food concept which, among other things, means that we do not have a buffet.

“There has been a lot of positive feedback regarding menus. The concept will certainly see a development along the way, but we believe we have food that contributes to an extra edge in the whole experience of sailing with us.”