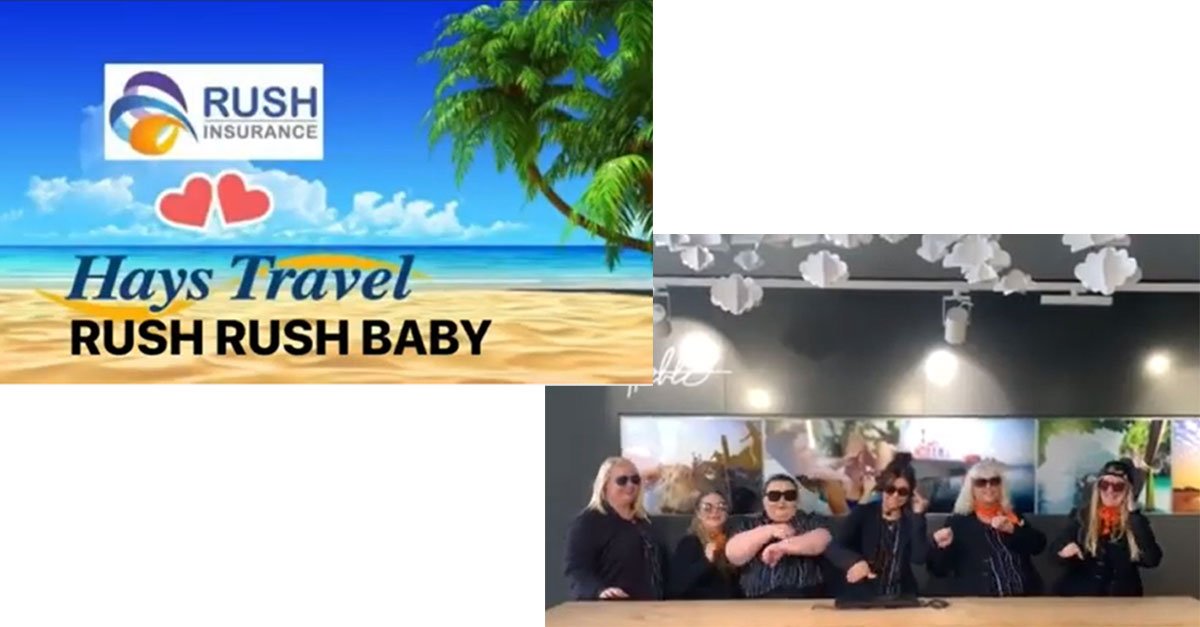 Selling travel insurance has not always had a good rap – until now, thanks to the lyrical poetry of the agents at Hays Travel in Teesside Park, Stockton-on-Tees.

They won a challenge set by Rush Insurance to show how sales of policies are key part of an agency’s product range – and now the agents are planning a night out as their prize.

Manager Libby Gray wrote the first draft and presented her idea to colleagues at a team brief. Together they worked honing the lyrics and creating a video, parodying the Vanilla Ice classic Ice Ice Baby.

“The brief from Rush said the presentation had to be fun – and we do have a lot of fun in the office – and we had to showcase what we sell, and how we increase sales,” said Libby G.

“We all tweaked it and added little ‘golden nuggets’. The younger ones know about apps such as Tik Tok and Snapchat, they are very creative.

“We laughed so much making it and we still watch it now – it makes us chuckle. It was a good team-building exercise.

“We’ll have to perform it on our night out – after a couple of glasses of wine.

“We were absolutely delighted to win; it was a lot of effort and we’re proud of it.”

Louise Bates, sales and partnerships manager at Rush Insurance, said the competition was held after a peaks campaign in January and February to encourage sales at Hays Retail branches.

“At the end of February, we compiled a list of the top 10 performing branches and asked them to submit a presentation to us on why they should be our winner,” she said.

She said the Teesside Park entry “completely blew us away” adding: “I think we can all agree travel insurance is not the most exciting of product, but, wow, did this team manage to put the fun into it.”

The prize will be a team night out Bates and Jeff Rush, founder and chief executive of Rush Insurance.

Alright, stop, take a seat and listen
See you’re in for your next adventure
Something grabs a hold of you tightly
Tells you not take insurance lightly
Will it ever stop, yo I don’t know
But you don’t want to test on a lateral flow
To the extreme your trip you could get your whole trip wiped out
So our insurance let’s have a checkout

Now that the industry’s jumping
We don’t want to see conversion slumping
Quick to the quote to the quote no faking
Cooking up trips like a pound of bacon
Burning them if we ain’t quick and nimble
We’re not here for your money to swindle
And if you’re single we can cover you solo
We’re on a roll, let’s up the tempo

What’s gonna happen if I lose my bikinis
What if I’m hit by a speeding Lamborghini
No problems call the emergency line
Just give them a call it will all be just fine
Ready for the scores on the doors
Rush insurance coming out of our pores
Weddings I can hear the bell
If you don’t top the cover then it gonna be hell
Skiers on the piste going real fast
Golfers worried their clubs are gonna get trashed
Bumper to bumper the stores getting packed
Trying to sell insurance coz my boss is on my back
Cruisers on the seas, you know what I mean
Let’s get you on to the medical screen

Going as a family, yo I’ll solve it
Rush Insurance can’t be faulted