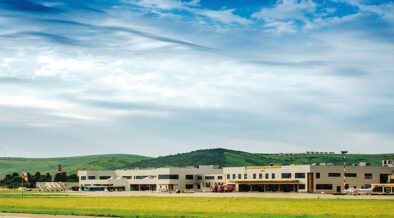 David Ciceo, managing director of Cluj International Airport, tells us more about how Romania’s second busiest airport has fared over the last two years and why he has high hopes for the future.

Cluj International Airport is located in Cluj-Napoca, a city named the ‘Heart of Transylvania’, not just because of its geographical position, but also for its role in the economic development of the region by being one of the most important academic, cultural, industrial and business centres in Romania and second city after capital, Bucharest. Undoubtedly, the air connectivity offered by Cluj International Airport had a major influence on the increased tourism, trade, investment, productivity, and development of the region. I believe that the increased annual passenger traffic from 36,000 in 1996 to almost three million in 2019 has helped the development of the region, but also of the city.

In 2019, there were more than 4,000 direct and indirect jobs created by the airport and its role as one of the region’s economic engines was obvious as the main interest of large companies to invest in a certain region depends on the available infrastructure and the air connectivity of that region.

Thus, through a coherent recovery, resilience and development strategy, Cluj International Airport will continue to positively influence the future of the entire region.

Like most of the regional and hub airports throughout the world, we faced some harsh times during the start of the pandemic, but managed to overcome many of the challenges brought upon the aviation ecosystem by the sanitary crisis and the subsequent travel restrictions through a balanced, coherent, and resilient set of actions which produced immediate effects. From re-evaluating our business plans and how we use our existing staff to support programmes for our tenants and airlines, I believe that we have taken all the measures that we could have done to navigate the airport through the crisis and ensure its long-term future.

Perhaps the best thing I can say is that at the end of 2021, ACI Europe named Cluj International Airport as the Best Airport in Europe in the category for airports handling less than 5mppa. This prestigious award confirms the airport’s successful activity during an unprecedented crisis worldwide and confirms the fact that the airport is on the right track in terms of our traffic recovery.

Attracting and retaining good employees is a big challenge because air navigation system providers and airlines can offer higher wages and we don’t have that many aviation specialists in our area. Thus, we hire people for their good attitude, and we train them.

Cluj International Airport has experienced two decades of increased passenger traffic while developing infrastructure at various stages, and this has propelled its status to become a top European airport for its size while also being the most important regional airport in Romania.

Apart from the challenges brought about by the pandemic, the main challenges we face concern the need for better infrastructure in order to improve the quality of services offered to both airlines and passengers and the need to extend the catchment area.

Given that the entire civil aviation scenario has changed with the pandemic, at this time our priority remains the passenger traffic recovery followed by the need to develop our infrastructure, increase passenger satisfaction levels and be able to continuously adapt to the fast-changing aviation industry.

With the exception of 2020 which, of course was severely impacted by the COVID-19 pandemic, the airport has registered a profit and 100% financed its operations since 2015.

Aeronautical activity remains our main source of income, accounting for 70% to 80% of our revenues. Like many airports we are actively looking to increase our non-aeronautical revenues, but it is not proving easy.

From a company wide perspective, our strategy over the last few years has been more heavily focused on making the best use of our workforce and safeguarding jobs, minimising unnecessary expenditure and resetting our business perspectives with a higher focus on support for airlines and tenders.

Fees from commercial facilities such as shops, restaurants and offices, advertising and car parking incomes are currently the primary source of non-aeronautical revenue for Cluj International Airport. We actively promote car parking and other commercial offerings at the airport through advertising campaigns. There is no doubt that increasing non-aeronautical revenues and opening new retail/F&B facilities that provide for a better exprience for passengers is more difficult for small and regional airports.

We all face different challenges and the pandemic has had a much bigger impact on the traffic levels at hub airports that are more dependent on long-haul, intercontinental flights.

Small regional airports are the seed for regional development and therefore must be an integrated part of regional policies for their respective regions to allow them to prosper and develop. It is not just about connection possibilities offered by airports, it is also about the long-term view at a regional level in terms of investments, trade and tourism development. Small and regional airports also feed connecting traffic to major hubs and play a significant contribution towards the success of these airports.

Low-cost carriers have had a hugely positive impact on the operation of the airport, especially since Wizz Air started flying to Cluj-Napoca after Romania joining the European Union led to the liberalisation of the air transport market. The increased competitiveness brought by the low-cost operators has boosted the Cluj air transport market, with real benefits for passengers in our catchment area who have seen their travel options grow over the years. As times change, we also must take into consideration the new trends, especially the future hybridisation of airlines.

Do you think that local and national governments appreciate the importance of regional airports and, in general, are supportive of your airport and aviation?

No achievements come easy, and even if the vision of an airport does not always overlap with the one of the local or national government, it is important to have a clear strategy and to believe in your projects, because that will help you to inspire and promote your vision to others.

If I were to look back at 1996 when the airport handled 36,000 passengers a year, there weren’t so many people who believed in the dynamic approach towards modernising and developing the airport infrastructure, but that strategy led us to the accomplishment of a historical threshold of 2.9 million passengers in 2019 and led to Cluj International Airport being called a ‘model of good practices and landmark airport in South-Eastern Europe’. Regional airports are most appreciated by the local community they serve. At the same time, local airports can face fierce competition from neighbouring gateways.

How do you plan developing your airport over the next five to ten years?

Cluj has managed to become a regional reference airport for South East Europe based on our clear plans for the short, medium and long-term. This means that we aim to continue the development of the airport’s key infrastructure in order to ensure that we provide quality services for both passengers and airlines in a safe and secure environment.

To achieve the goal of serving 7mppa passengers by 2040, we will continue with projects to extend the runway, construct new apron and aircraft parking areas and build a new passenger terminal. After the extension of the runway, in 10 years’ time, I would expect to see the introduction of a direct flight from Cluj-Napoca to New York.

It is important to add that all current and future airport development projects for Cluj International Airport will consider our commitment to the Net Zero by 2050 goal, which was recently strengthened by the signing of the Toulouse Declaration on future sustainability and the decarbonisation of aviation.