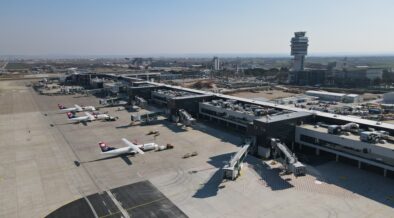 The upgrade of Belgrade’s Nikola Tesla Airport continued this week with the opening of the Serbian gateway’s new Pier C.

The new 13,600sqm addition to the airport provides an extra 13 boarding gates, meaning that Terminal C is now equipped with 19 gates.

According to operator, VINCI Airports, the new facilities are in line with its global identity in terms signage, colour palettes, architecture and interior design.

Other improvements introduced at the airport include the opening of a more spacious boarding area and moving walkways to ease and speed up passenger flows.

To make Pier C possible, the airport had to add another 27,000sqm of apron to accommodate four new aircraft parking positions, including one for a widebody jet.

The ongoing upgrade of the airport, which is set to be completed in 2023, comprises an extension to the passenger terminal, additional boarding bridges and gates, a new runway and the complete renovation of the existing runways.

Elsewhere on the airport site, VINCI Airports reveals that it has completed the construction of a new solar plant.

The plant covers an area of 15,077sqm and boasts more than 3,000 photovoltaic panels.

Once operational, it will provide Belgrade Airport with 1,200.000kWh of solar energy per year, sustaining VINCI Airports’ ambition to reach Net Zero Emission on all its network by 2050.