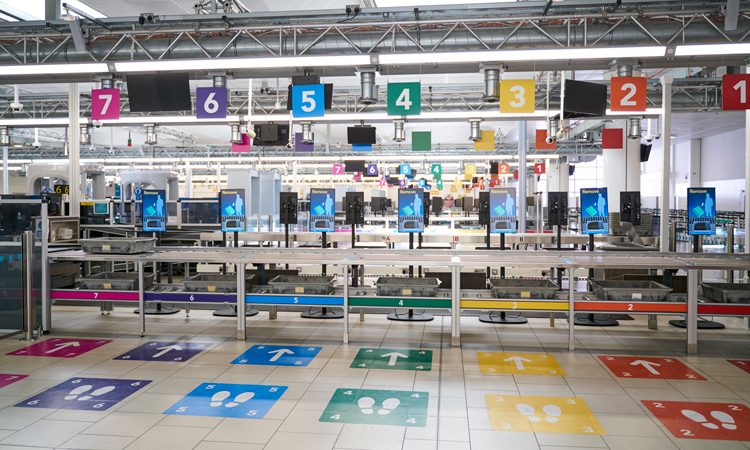 London Gatwick Airport, one of VINCI Airport’s innovation centres of excellence, has updated its 20 security processing lanes so that passengers now move quickly and smoothly into the departure lounges.

Each security lane in the airport’s two terminals has seven ‘divest positions’ – where passengers empty their belongings into trays – and 3D sensors can now tell whether each position, on each lane, is occupied or vacant.

Data picked up by the sensors is then calibrated and sent to screens displaying colour-coded graphics – and is also broadcast audibly – so that passengers are clearly directed to the nearest vacant position.

The screens sit prominently in forward waiting areas that accommodate two passengers, whose arrival is also detected by sensors when they reach the head of the ‘snake queue’ (image 1 above and 2 below).

Going with the flow

To maximise efficiency, the new process relies on a continual flow of passengers moving on to each security lane.

So, the airport created a row of seven ‘waiting’ positions behind each of the seven divest positions to ensure the most efficient distribution of passengers (see image 3 above).

“The new system identifies the best next available queue position and so provides passengers with the shortest wait possible. This also helps keep the queue flowing and the lane constantly running.”

While the system and process are new, much of the technology was already available and in place at the airport.

Many of the sensors being used were – to a large extent – already in place above the security lanes.

And the airport’s existing Splunk technology was used to process and communicate the occupancy data to direct passengers.

The airport also looked to its inhouse IT team to design an algorithm to process the occupancy data.

To maximise efficiency, the new process relies on a continual flow of passengers moving on to each security lane”

Gatwick’s inhouse team also installed screens (images 4 and 5 below) that run an animation to remind passengers of the items they should unpack into the trays, with an airport security officer also on hand to help passengers.

The new system was timely this summer, as airports reported more hand luggage items were being

rejected in the scanner and subsequently needed searching, increasing congestion in peak periods.

“Many passengers forgot about airport processes during the pandemic,“ continued Cyrus. “Along with staff on each lane, the new screens are another way for us to communicate with passengers about the items they need to remove from their hand luggage.”

As an innovation centre of excellence in the VINCI Airport’s network, London Gatwick’s new security lane system is a candidate for deployment across other airports in the network.

One innovative solution already pioneered by London Gatwick that is now used across other VINCI Airports’ platforms is the Airport Community App, which ensures that multiple airlines, other stakeholders and airport staff have the latest information across an airport campus.

Both initiatives fit with VINCI Airports’ innovation strategy which looks to improve the passenger experience, airport operations and also to develop intelligent infrastructure.

It played a role ensuring that London Gatwick did not experience issues at security to the extent that some other airports did – with average security queue times at around 10 minutes or less this summer.

As an innovation centre of excellence in the VINCI Airport’s network, London Gatwick’s new security lane system is a candidate for deployment across other airports in the network”

This strong performance was also made possible by the early recruitment of 400 new security colleagues, and Gatwick has already started recruiting more staff ahead of an expected busy 2023.

Updates for the Call Forward system are also currently being trailed, so airport’s security lanes could be even more efficient by the time these new colleagues start work.

“As an airport we’re passionate about – and pride ourselves – on getting passengers through security quickly and smoothly. We’re aiming to improve on our good performance this summer and get back to pre-COVID levels of service – with over 95 per cent of customers getting through in under five minutes,” concluded Cyrus.

Cyrus Dana has been Head of Security at London Gatwick Airport for over six months, where he is currently focused heavily on creating a great customer experience. Previously he led large supermarket stores and their regions for almost 25 years.