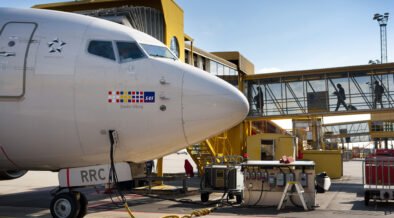 Swedavia has begun the build up to Malmö Airport’s 50th anniversary later this year by highlighting how its development over the years has benefitted the southern Swedish province of Scania and the Öresund region.

“After more than two years of pandemic, naturally it feels really great to have the opportunity to highlight Malmö Airport’s role and importance for southern Sweden as well as the development journey that the airport has made as an international, climate-smart meeting place in its first fifty years,” said airport director Karin Öhrström.

“Our important mission now continues, with a great focus on enhancing access to the region and the rest of the world while we continue to drive the industry’s transition to net-zero aviation.

“Great recruitment efforts are being carried out by us and our business partners at the airport to handle more passengers this summer and beyond after several years of pandemic.”

Celebrations for the airport’s first fifty years will be under way until the end of the year, starting in May, and passengers and other visitors will be able to take part, including through exhibitions at the airport and via Swedavia’s social media.

Historical photos and interviews with current and former employees will give visitors a look back in time, and milestones and highlights will be presented with a focus on the airport’s development and importance to the region.

This historical retrospective will be interspersed with the airport’s vision of the sustainable air travel of the future.

– The first aircraft landed at Malmö Airport in 1972.

– Since the airport was inaugurated, more than 60 million passengers have passed through it on their way to work, a holiday or the biggest adventure of their life.

– Over the years, Malmö Airport has been developed to meet the needs of future passengers, with the expansion of terminals, aircraft parking stands, hangars, car parks and take-off and landing runways for planes and helicopters.

– The development of Malmö Airport has helped to make it an important connecting link in the Öresund region, with traffic evenly divided between international and domestic travel.

– Together with Swedavia’s other airports, Malmö Airport is first in the world to have zero fossil carbon dioxide emissions from its own operations.