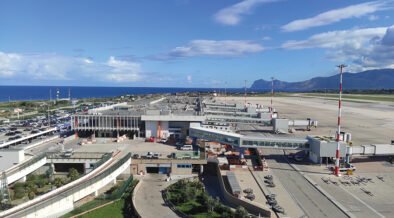 Natale Chieppa, managing director of Palermo-Falcone Borsellino Airport operator, Gesap, reflects on the vital role his gateway plays in the growth and development of Sicily.

All regional airports are important, but arguably those located on an island are even more crucial to the communities they serve, and PMO is no exception to that rule. Palermo is one of four airports in Sicily which between them traditionally handle around 19 million passengers per annum as they provide a very important connectivity role for the territory since, for many people and businesses, air transportation is the only way of travelling to and from Sicily.

To give that some perspective, in 2019, people living within our catchment area made an average of 3.8 trips each compared to 2.9 in the rest of Italy.

In terms of jobs, we estimate that at least 2,500 people are directly employed at PMO. This, of course, is a much larger figure if you include all those indirectly employed as a result of the existence of Palermo Airport. Indeed, some university studies and consultancy firms in Europe estimate that 900 jobs – direct and indirect – are created for every one million passengers handled by an airport.

In terms of economics, research by a number of well-know consultancy firms suggests that each arriving or departing passenger boosts the local profit and loss (PNL) of each airport by close to €500, which in our case, would have resulted in a positive contribution to the local PNL of about €3.5 billion in 2019.

These kind of figures can help you understand just how important PMO is to Palermo and the entire territory of Sicily in terms of its positive social and economic impact.

PMO together with some other Italian regional airports located in the south of Italy are recovering faster than the national average due to the increase in domestic traffic, particularly in the 2021 summer season.

In 2020, compared to the average traffic loss of -72.3% in Italy, our airport experienced a loss of -61%. In 2021, the average loss of traffic across Italy was -58% whereas PMO performed ‘better’ in recording a decline of -35%. It is worth noting that in the second half of 2021, Palermo was often among the top five best performing airports in Europe for gateways usually handling between five and ten million passengers yearly. For the current calendar year, our actual year-to-date trend up until February 23, 2022, is -20% compared to 2019.

They have transformed air travel to Palermo by dramatically improving our connectivity in the five years before the global pandemic. In 2019, the market share of the LCCs exceeded 70% of our total traffic and we expect this to continue for the foreseeable future.

Do you think that local and national governments appreciate this importance and, in general, are supportive of your airport and aviation?

We believe that here in Palermo there is quite a good appreciation from government about the vital role PMO plays for Palermo, the surrounding region and the whole of Sicily.

These are probably no different to any other airport our size, but what I will say is that during the global pandemic the most challenging area was funding our masterplan for PMO, given our decision not to interrupt any of the developments already planned before the COVID outbreak.

We have regularly been profitable since 2015, although not during the pandemic, of course! Aviation related activity currently provides 80% of our income and non-aeronautical revenues for 20%. Non-aero related sources of revenue include our retail/F&B offerings and office rental, although car rental operations provide the airport with the biggest source of income from non-aviation related activities.

We are developing a new commercial plan that will create a number of new retail/F&B areas as the current offerings are not adequate in terms of space and capacity to meet demand given the upward traffic development of recent years.

In regards to the global pandemic, I believe that bigger airports are probably having an even tougher time than us in terms of the financial and funding challenges, although they are in a better position to attract good staff and develop their route networks when the market picks up.

Because each serves a local community that might otherwise have no air links at all. Regional airports can provide great development opportunities to local communities by offering direct, point-to-point connections to destinations that are not usually served from main hubs. Tourism and the local economy are more competitive if they are better (and faster) connected with the world.

How do you plan to develop your airport over the next five to ten years?

We have many plans to develop the airport which include proposals to invest more than €70 million by 2033 on increasing the capacity of PMO and, just as importantly, our revenues from non-aeronautical services.