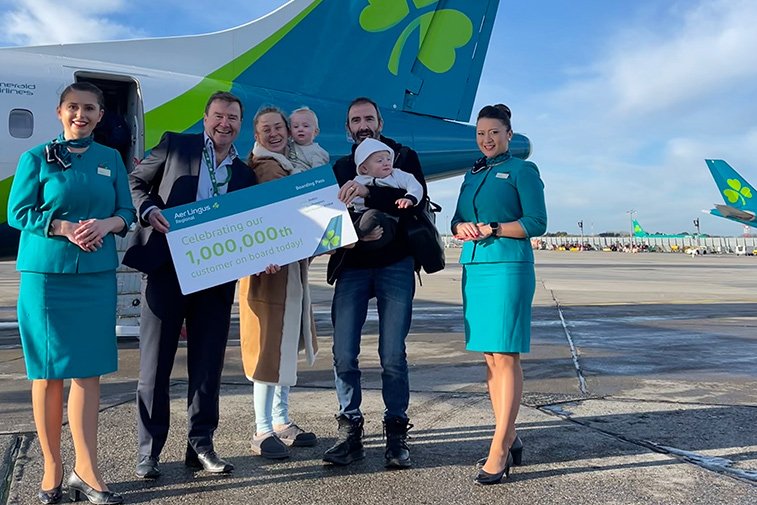 Emerald Airlines has celebrated its one-millionth passenger, less than 12 months since its inaugural flight from Donegal to Dublin. By summer 2023 it will fly 25 routes – 15 from Dublin and 10 from Belfast, with over 580 flights per week.

Emerald Airlines, exclusive operator of the Aer Lingus Regional network, has celebrated its one-millionth passenger, less than 12 months since its inaugural flight from Donegal to Dublin.

The lucky Brady Family, travelling on flight EI3304 from Dublin Airport to Southampton were awarded four complimentary, roundtrip tickets to use anywhere on the Emerald Airlines/Aer Lingus Regional route network.

The airline began flying on the Dublin-Donegal route on 26 February 2022 and has experienced significant growth ever since. By summer 2023 it will fly 25 routes – 15 from Dublin and 10 from Belfast, with over 580 flights per week.

“Having only operated our very first flight less than 12 months ago, to have just welcomed our one-millionth passenger in such a short time frame is a really great achievement by the whole team here at Emerald,” said Conor McCarthy, Executive Chairman, Emerald Airlines. “We wish the Brady Family a really enjoyable trip and we look forward to welcoming them on board many times more in the future!”

Emerald Airlines recently announced its summer 2023 schedule, with new routes from Belfast to Jersey and Newquay, along with an increase in frequency on services including a doubling of seats on Dublin-Southampton and Dublin-Jersey.

In addition, the airline has added more flights on high-frequency routes including Dublin-Glasgow, Dublin-Edinburgh, Belfast-Manchester, and Belfast-Birmingham. The new routes and additional frequencies form part of Emerald Airlines’ wider expansion strategy, which will come to fruition over the coming months, seeing the delivery of additional aircraft, adding further capacity, and further increasing frequencies.