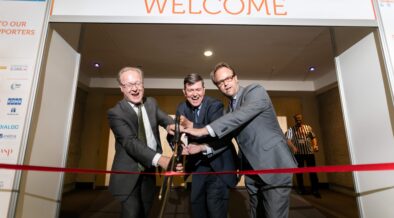 Tom Ruth, the enthusiastic and forward thinking president and CEO of Edmonton International Airport (EIA), has announced that will leave his position at the end of 2022 after more than nine years in the hot seat.

The Canadian gateway’s Board of Directors described him as a visionary leader that had inspired major changes, growth and innovation at EIA by imagining something much bigger than a traditional airport.

The Board notes: “Under his leadership, EIA has seen significant growth in both passenger and air cargo service, connecting the Edmonton Metropolitan Region with direct flights to over 50 destinations within Canada, the US and Europe and cargo to and from Asia.

“Tom has also advanced development of the Airport City Sustainability Campus at EIA, with more than $1.3 billion dollars in private investment, including hotels, a casino, shopping centres, major business and innovation developments including its five-year Innovation Expansion strategy.

“He has overseen the development of technology and agriculture accelerators connecting local and international businesses to new markets. As a leader in sustainability, EIA will soon welcome Airport City Solar, the largest solar farm at an airport in the world.”

The Board also acknowledged his strong and stable leadership during the pandemic and the fact that he consistently put health and safety first as he led the airport through COVID-19.

Ruth, a long-time friend of Airport World, says: “I’m so proud to work with such a strong team of dedicated, passionate employees at our airports. It has been an honour and a pleasure to lead Edmonton International Airport and Villeneuve Airport for the past nine years, and when my time wraps at the end of 2022 I will look back and treasure this time in my career.

“We have accomplished so much together at our airports creating positive economic impact and sustainable jobs within our vibrant Edmonton Region. We grew air service and international cargo capacity, attracted more than a billion dollars of private investment to our region and accelerated our bold ESG initiatives even during the challenges of COVID.

“I want to thank everyone at both Edmonton International and Villeneuve Airports for their continued tireless dedication in supporting the noble vision of creating accelerated economic prosperity for everyone in the Edmonton Metro Region.”