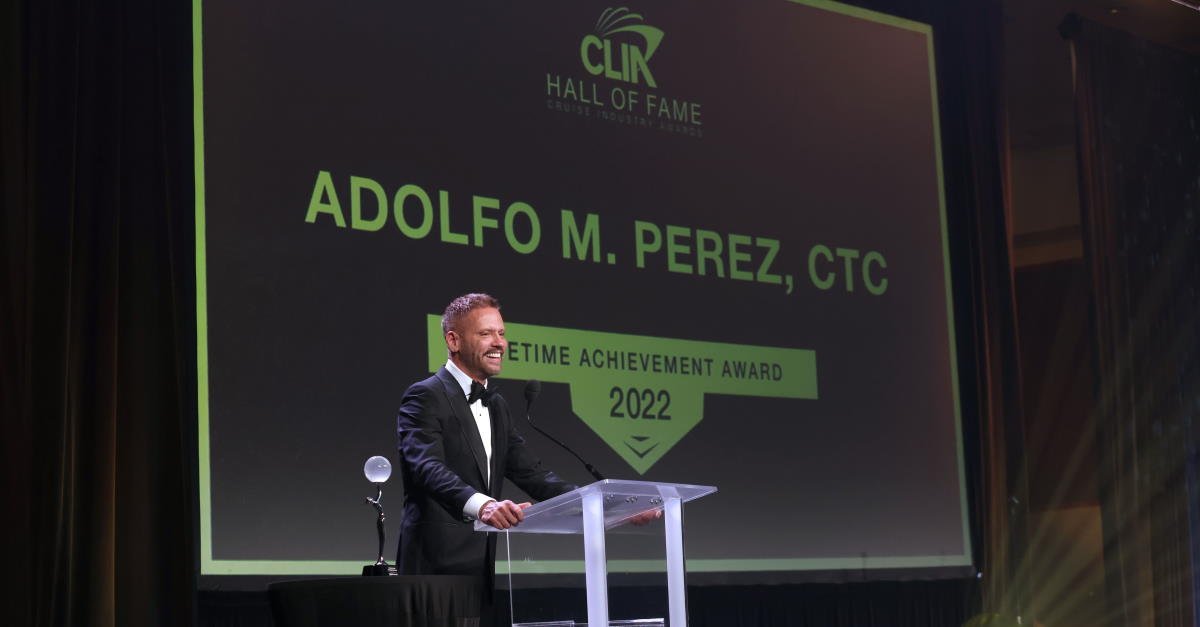 Carnival Cruise Line’s Adolfo Perez has been honoured by global trade body Clia for four decades of commitment to a sector he first joined as a teenager.

Perez was presented with Clia’s Lifetime Achievement Award at the 2022 Hall of Fame Cruise Industry Awards held in Miami.

The award was presented by Carnival Cruise Line executive vice president and chief commercial officer Ken Tate for Perez’s significant contributions to the cruise industry. The honour comes as Perez marks 40 years with Carnival while the operator celebrates its 50th birthday.

Perez said: “Despite the fact we have grown into a huge travel leisure company with nine brands, from the Carnival Cruise Line side, it still feels like a family. I’m proud to be part of this family – this company and industry. It’s been an amazing 40 years and I look forward to more fun with the Carnival family ahead.”

Perez’s career with Carnival started when he was just 16-years-of-age with him working as an embarkation agent at PortMiami in 1982.

He has helped launch 34 Carnival ships and has been a passionate supporter of the firm’s partnerships with agents, introducing initiatives such as Travel Agents Rock – a motto he wears with pride as a tattoo.

He also instituted the Agentpalooza Bus Tour and the first consumer-focused campaign to promote travel agents, Why Use a Travel Advisor (WUATA).

Carnival said he “revolutionised” the connection between Carnival, travel advisors and guests through his Facebook page and his ‘Live from Adolfo’s Desk’ webinars and media columns.

Christine Duffy, Carnival Cruise Line president, said: “Adolfo epitomizes the essence of partnership and support to our travel partners, and he has enhanced the impact our company has in continuing to deliver memorable vacations to all.”

Arnold Donald, president and chief executive of Carnival Corp, added: “Adolfo has been an integral part of Carnival’s success and the growth and success of the global cruise industry for 40 years. We are proud to join with all our partners and friends in the industry to recognize and celebrate Adolfo on his incredible career – and no doubt there is more success to come.”

Clia’s Lifetime Achievement Award honours individuals who make remarkable, positive contributions to the cruise industry. A panel including Clia leadership and members of its Strategic Trade Advisory and Review Board and Trade Relations Committee decides who should receive it.