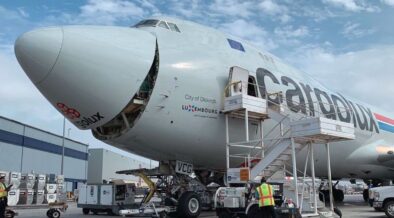 Cargo operations at Los Angeles International Airport (LAX) in March set a new all-time record for trade by value moved in a single month, with a total of $13.75 billion in global imports and exports.

International trade at LAX in March 2022 increased 22.33% from the same month one year ago, and increased nearly 16% compared to February 2022.

Total imports at LAX reached $8.18 billion in March, while total exports topped $5.57 billion. From January through March this year, trade at LAX was valued at $38.28 billion, an increase of more than 26% compared to the same time last year.

“As the No.3 airport in the US for trade by value, LAX continues to play an important role in the global supply chain and serves as the nation’s premier West Coast hub for air cargo operations,” said Justin Erbacci, CEO of operator, Los Angeles World Airports (LAWA).

“As we modernise our cargo operations in the coming years, the future of air freight at LAX includes maximising supply chain efficiency, leveraging new technologies and ensuring that our new facilities are sustainable and a model for the rest of the country.”

LAX currently ranks No.8 for total US trade by value among all of the nation’s 450 airports, seaports and border crossings. In 2021, LAX ended the year as No.9 for US trade, overall.