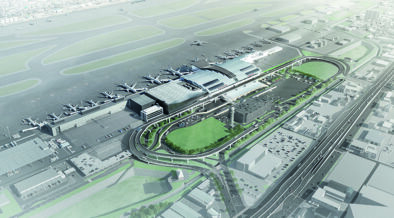 Airport World talks to HOK’s Hiroyuki Kawakami and Azusa Sekkei’s Makoto Ishii about plans to transform and expand the international terminal at Fukuoka Airport in Japan.

Construction is underway on a “state-of-the-art international terminal expansion and renovation project”, which together with a new runway, will effectively equip Fukuoka Airport to handle up to 16 million passengers per annum by the end of 2025.

The airport selected Azusa Sekkei, HOK and West JEC to design the new-look international terminal, Azusa Sekkei and HOK being well known to it as they led the design team for the original terminal back in the 1990s.

The project will create an expanded commercial hall with new retail and F&B offerings; a refreshed departure hall, meeter/greeter space and bus terminal; and provide additional gates and security lanes in the international terminal.

At the same time as the international terminal is being revamped and expanded, the Japanese government has given the green light to a separate project to build a new runway at the airport, with both due for completion in 2025.

Below architects Makoto Ishii and Hiro Kawakami tell us more about why the upgrade was needed and what passengers can expect from the new and improved terminal when it opens in three years’ time.

Why does Fukuoka Airport need to upgrade and expand its facilities?

Quite simply the new facilities are needed to allow Japan’s fourth busiest airport to keep up with demand. The capacity of the existing international terminal is 3.9 million passengers annum. When the expanded terminal is completed it will be capable of accommodating
12 million annual passengers.

The airport is also getting a new runway in a separate government-driven project. With additional future gates, the expanded international terminal will eventually be able to handle 16 million passengers.

What was your design brief for the terminal renovation and expansion project?

How big is the terminal expansion and what is the timescale for its construction?

The total terminal floor area following the expansion will be 130,000 square metres. This is approximately twice the size of the existing building. The majority of the construction is scheduled to be completed by March 2025. Some interior renovation projects will be done by the end of 2025.

What will the expansion add in terms of facilities and enhanced capabilities for the airport?

In addition to those already mentioned, the expansion project will add a new inbound and outbound passport control area; a new-look baggage claims area; an extra concourse/gate holdrooms; and a new parking facility.

Will the expanded terminal feature a sense of place in its design and facilities?

The exterior architectural concept is ‘simple and fluid’. The design team’s intent is to create harmony with the existing building without simply replicating the current structure. It will incorporate a new form and aesthetic, expressing the airport’s mobility and ambition, that represents the new Fukuoka Airport. As you would expect, the interior design features various Japanese and local traditional crafts from Fukuoka through colour, texture and geometric patterns.

Has the advancement of IT systems and touchless technology been factored into the expansion project?

The airport will adopt emerging technology while maintaining its current use of e-gates and auto passport control systems. An autonomous inter-terminal shuttle bus is also under consideration for some time in the future.