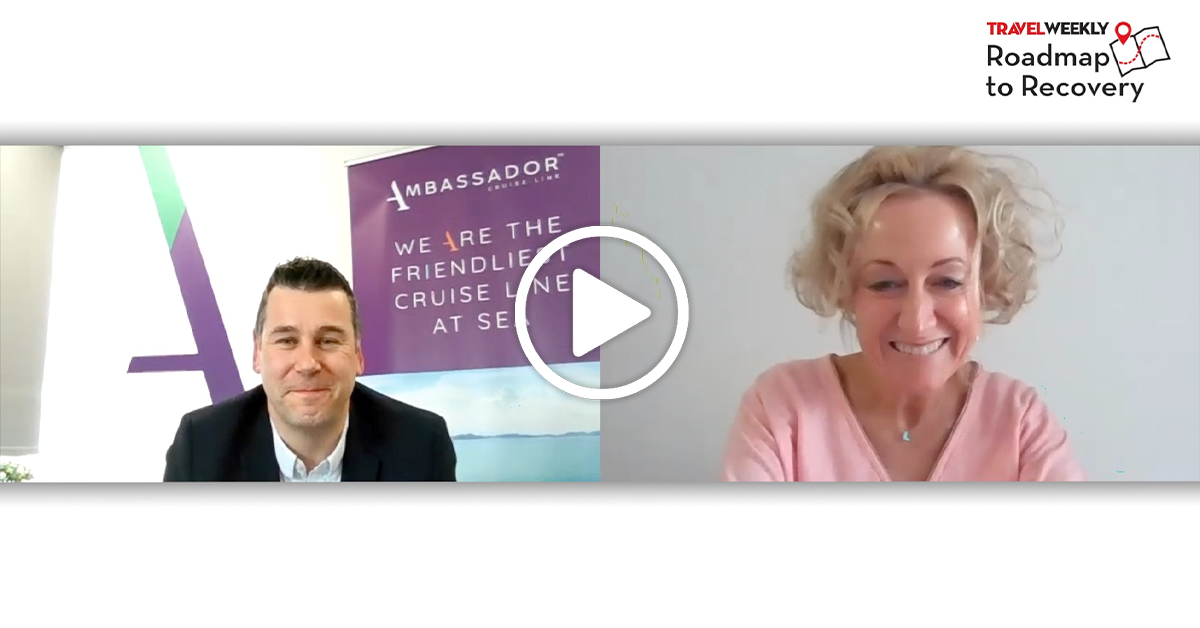 Ambassador Cruise Line has seen revenues per day exceed its expectations, despite a market that is up and down “like a yo-yo”.

Its first vessel, Ambience, starts cruising on April 19, after a trade event on April 18, and the first voyages on second vessel Ambition will be announced soon.

Phil Gardner, chief commercial officer at the new cruise line, joined the company in February, after its sales had already seen a successful launch in June 2021.

“It’s wonderful for me, because I’ve had the rather lovely opportunity of joining a business that had a fantastic start,” he told a Travel Weekly webcast.

“Literally 50% of the programme was sold in the first three months. I’ve got big shoes to fill.”

Gardner said there is a “really strong” market for the cruise line’s target demographic of over-50s Brits – and the fact that passengers can board in Tilbury rather than fly to their cruise is a selling point in light of recent delays at UK airports.

He added: “We look closely at revenue per day; that’s quite a common metric in cruise.

“And our revenue per day is far in excess of what we ever expected it to be.

“Our ability to upgrade is actually really strong.”

Another factor in the line’s sales success is quick response times from staff in the call centre, he added, which is a bonus for customers as well as the trade.

However, he said recent market trends are “up and down, like a yo-yo”.

“Whilst I’ve seen that before in my career, I don’t know that I’ve seen it quite as up and down as this,” said Gardner, who has 20 years of trade experience, including working for Thomas Cook.

“Perhaps the most positive thing from the last couple of weeks is that there are some itineraries that have been really consistent for us.”

He said round-Britain cruises have sold well since they were launched and prices for late sales are holding up well.

“In lates, what you would normally expect is a race to the bottom with a number of cruise lines with lots left to sell on low-price, short sailings,” he said.

“I’m very pleased to see that we’re able to buck that trend a little bit.

“We had a very good turnaround in trading, for example, last week on the Arctic voyage, which is only a couple of months away.

“We perhaps don’t need to race to the bottom on price as much as others because a) we are a new brand that people are definitely backing and b) it’s just not something that we really want to do with a new brand.

“We want to make sure that we’re offering value. Trashing a cruise holiday with low prices that you’ve previously sold at a different level is not something you want to get involved in.”