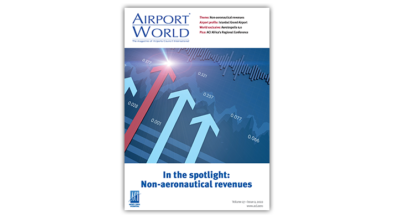 Airport World editor, Joe Bates, reflects on the latest traffic trends and the ‘non-aeronautical revenues’ theme of this issue.

It almost seems wrong to be talking about the growing momentum of aviation’s recovery from the global COVID pandemic as war rages in the Ukraine, but as the traffic news is largely positive, and we are the global publication of ‘the voice of the world’s airports’, it is something worth highlighting.

But before we get to the latest traffic figures, let us quickly review ACI World’s recently released provisional traffic data for 2021, which confirms that global passenger numbers rose by 25% to 4.5 billion, although the total for the year is still 50% down on 2019.

A combination of factors, which include a large domestic market, saw most major US airports bounce back strongly in 2021. These included Hartsfield-Jackson Atlanta (ATL) – which welcomed 75.7 million passengers to regain its status as the world’s busiest airport – while the performances of Dallas/Fort Worth (DFW), Denver (DEN), Chicago O’Hare (ORD), Los Angeles (LAX), Charlotte (CLT), Orlando (MCO) and Las Vegas (LAS) earned them a Top 10 ranking.

Coming right up to date, in April 2022, a number of European and US airports started reporting their busiest daily and monthly traffic totals for two or three years, their throughput being boosted by the easing of international travel restrictions and, most recently, by the Easter holidays, although the much-publicised delays caused by staff shortages meant that many struggled to cope with the rising demand.

Those reporting an upturn in traffic in March 2022 include Ontario International Airport in the US, which welcomed 4% more passengers during the month than it did in March 2019; London Heathrow in the UK, which enjoyed its highest monthly passenger numbers since the start of the pandemic; and Spanish airport operator, AENA, which notes that passenger numbers across its network were back to 78% of 2019 levels.

There is, of course, still a very long way to go until passenger numbers are back to pre-pandemic levels across the globe, particularly on international routes, but the upward trajectory in traffic gives grounds for optimism that better times lie ahead.

It could be argued that events of the last few years have shown airports just how important non-aeronautical revenues are in terms of helping them balance the books and potentially help fund the development of new facilities and services.

ACI World’s vice president of economics, Patrick Lucas, specifically addresses this topic in his lead feature in the ‘non-aeronautical revenues’ themed section of this issue of Airport World.

The themed section also contains features about how airports can enhance their retail and F&B revenues; Zurich Airport’s new Circle leisure and business district; and the ever-evolving aerotropolis concept.

Elsewhere in the issue, we report on the highlights of the recent ACI Africa Regional Conference and Exhibition in Mombasa; and have articles about airport art; embracing artificial intelligence; sustainability; and the benefits of creating outdoor spaces in airport terminals.

Our lead airport feature is on Istanbul Airport (IST), which has arguably led Europe’s recovery from the global pandemic having been the busiest airport on the continent for the last two years.