Istanbul Grand Airport: Ahead of the curve 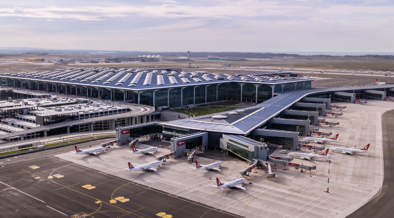 The opening of the world’s first airport lounge for young travellers and a new innovation programme ensure that 2022 has got off to a good start for Istanbul Airport, writes Joe Bates.

Istanbul Airport has been grabbing the headlines since its much-heralded opening in April 2019, and it continues to shine, leading Europe’s traffic recovery from the COVID-19 pandemic and unveiling two pioneering new initiatives in the first quarter of 2022.

The airport – referred to as Istanbul Grand Airport by operator iGA Airport Operation (iGA) – handled 52 million passengers during the 10 months it was open in 2019, and was expected to welcome more than 90 million in 2020, when the global pandemic stopped international travel in its tracks.

Nevertheless, Istanbul Airport (IST) handled a creditable 23 million passengers in 2020 to become Europe’s busiest gateway and almost certainly held on to the crown last year when it accommodated an impressive 37.1 million passengers.

The figures ensure that it fared much better than most of the world’s leading international airports during the pandemic, although iGA CEO, Kadri Samsunlu, is quick to note that he hasn’t celebrated IST becoming Europe’s busiest airport due to the circumstances in which its new found status has been achieved.

“I would very much prefer it if we could go back to how things were pre-COVID as the world needs a healthy, competitive aviation industry,” says Samsunlu.

“I would say that we are doing OK. Our passenger numbers returned to around 70% of 2019 levels last year and air traffic movements were back to 75%-80% of what they were before the pandemic.

“Planes are flying, and routes are returning, so our priority in the latter half of 2021 and this year is to boost load factors, which are about 10% down on where they used to be and what the airlines want.

“The reason why we have handled bigger volumes of passengers compared to other European airports is because Turkey has a population of 85 million people and therefore a sizeable domestic market, which has come back very strongly for multiple reasons.

“The reasons include the devaluation of the Turkish currency, which has made travelling aboard expensive. Visa difficulties have also led to more people holidaying at home than before, and this pent-up demand to travel domestically has been encouraged by a tight cap on domestic air fares that makes travelling within Turkey pretty cheap right now.”

This year is expected to be even better for IST in terms of passenger numbers as more international routes and services resume and people from Europe, in particular, start to travel again for holidays and, to a lesser extent, on business.

Indeed, iGA’s forecast for the year is for passenger numbers to reach 80% of pre-pandemic levels in the first half of 2022, and to return to 2019 levels in the second half of the year, paving the way for growth all the way from 2023.

And ACI EUROPE traffic figures for February 2022 appear to support this prediction with IST doing the best out of the continent’s top five airports for passenger numbers with its throughput for the month just 26.6% down on February 2019.

However, things are not quite so clear now due to the war in Ukraine, as Istanbul has historically been an air bridge to the rest of the world for many Russians and Ukrainians.

What we do know for sure is that the latest data released by iGA shows that the airport handled a total of 122.9 million passengers and 852,900 flights between its April 6, 2019, opening and March 27, 2022, and its monthly passenger numbers are on the rise.

Arguably, iGA’s confidence in the future has been demonstrated by two recent initiatives – the opening of what is believed to be the world’s first airport ‘Youth Lounge’ for passengers aged between 15-30; and the unveiling of iGA Hub, a development it describes as a new “centre for aviation initiatives”.

iGA promises that the new facility – located in the international departures level – will offer “an exclusive, relaxing, and enjoyable travel experience to young people” as it aims to transform the airport experience for younger passengers.

According to the airport, the Youth Lounge offers “numerous possibilities to engage the attention of young people”, which include a PlayStation music system, giant screen projector, table soccer, free board games sponsored by D&R and, on occasion, live performances.

It adds that the facility has been exclusively customised for Gen Z, a move that is said to ensure “reasonably priced snacks, a selection of coffees, and seating areas which maintain social distancing”.

Istanbul Airport’s chief digital and commercial officer, Ersin Inankul, says: “Our primary goal for Istanbul Airport is to carry this unique structure far beyond the point of just being a journey, and transforming our guests’ journeys into unforgettable experiences.”

Samsunlu explains that that the airport has joined forces with ITU ARI Teknokent – the headquarters of entrepreneurship and innovation in Turkey – to launch iGA Hub, a programme designed to foster “the development of ideas and create value for the economy of the country”.

Indeed, the iGA Hub programme aims to build an entrepreneurial environment for the development of projects in the civil aviation and airport management sector in the fields of smart airport, robotics, sustainability, digitalisation, IoT, security and mobility.

IST employees with innovative projects and technology-based business ideas are actively being encouraged to apply to take part in the programme, with each chosen initiative potentially able to share some of the TRY800,000 (€50,000) in prize money associated with the scheme.

ITU ARI Teknokent’s Incubation Centre, which is ranked among the top five in the world, will benefit and support initiatives in areas such as training, mentorship, prototyping, networking, and investing.

Samsunlu, who notes that the iGA Hub will effectively create a bridge between different interested stakeholders and entrepreneurs, has no doubt that technology is one of the key ways airports can increase their operational efficiency and global competitiveness.

“With iGA Hub, we intend to contribute toward the future development of global civil aviation,” enthuses Samsunlu. “It is part of our journey on the road to becoming a worldwide brand, as the initiatives developed at Istanbul Airport will assist other industries as well as the aviation sector.”

The gateway, which replaced Istanbul Atatürk Airport as Turkey’s main hub, is certainly no stranger to awards and achievements.

Its impressive $10.2 billion terminal building, for example, is LEED Gold certified by the US Green Build Council (USGBC), the award recognising the sustainability efforts that went into designing, constructing and operating it.

Another achievement worthy of note included becoming the first gateway in the world to be accredited in ACI’s Airport Health Accreditation programme.

And far from resting on its laurels, he promises that the awards will only serve to motivate IST to do even better in the future, and hopefully, continue to “inspire the industry”.

From an operational perspective, Istanbul Airport opened its fifth runway and third independent parallel runway in June 2020, meaning that it is now capable of handling up to 120 aircraft movements per hour.

Samsunlu notes that iGA was three months ahead of the Turkish government in endorsing the Paris Agreement on Climate Change when, in August 2021 “with strong encouragement” from ACI EUROPE, it announced its commitment to become a net-zero carbon emissions airport by 2050.

He admits that the “inherent advantages” of the airport’s modern, low-emissions LEED Gold certified terminal building will play a key role in helping it achieve the Net Zero 2050 goal, as will a host of initiatives to maximise efficiency on the airfield and across the airport campus.

Istanbul Airport’s Sustainability Report for 2020 also outlines plans to plant 1.2 million trees over the next five years, which is equivalent to the size of creating a 5,000-hectare forest.

Samsunlu adds that IST currently recycles 40% of its solid waste and only uses recycled water to irrigate landscaped areas across the airport’s huge 42 million square metre site. The airport is also in the process of installing solar canopies in its car parks and, longer term, is expected to build solar power farms in more remote areas of the airport site.

“Sustainability has always been an important guide for us in all our steps from design and construction to operation,” says Samsunlu.

“We are shaping our works in line with the UN’s Sustainable Development Goals. We respect the planet we live in, we act with a sense of responsibility towards future generations, and we are aware of the importance of responsible consumption and management.

“The sustainable and efficient management of resources has become an inevitable necessity in today’s world.”

Like all major hubs, IST has benefitted from having a strong airline as its home-carrier. In its case, it is Turkish Airlines, which has grown to become a major force in recent years, serving more non-stop destinations from a single airport than any other airline in the world.

Indeed, Turkey’s national flag carrier traditionally accounts for around 80% of all passengers passing through the airport and for 98% of all connecting traffic.

Pre-COVID, it operated non-stop services to 326 cities in 127 countries across the globe from Istanbul, with its route network including 21 cities in the US, 116 in Europe, 36 in the Middle East, 60 in Africa and 43 in Asia-Pacific as well as 50 in Turkey.

Turkish Airlines is also a growing presence in the movement of air cargo, boasting 35 freighter aircraft in its fleet, which in addition to bellyhold space on passenger flights, has led to it becoming the fifth biggest cargo airline in the world excluding integrators.

With these figures in mind, is it fair to say that Turkish Airlines will play a huge part in IST’s recovery from COVID-19 and future success?

Samsunlu says: “They are the national flag carrier of Turkey, our hub carrier and biggest airline, so they are extremely important to the success of Istanbul Grand Airport.

“Going forward, we hope to work even more closely with them, particularly when it comes to sharing data, as there are huge operational and monetary benefits to be gained from greater co-operation.”